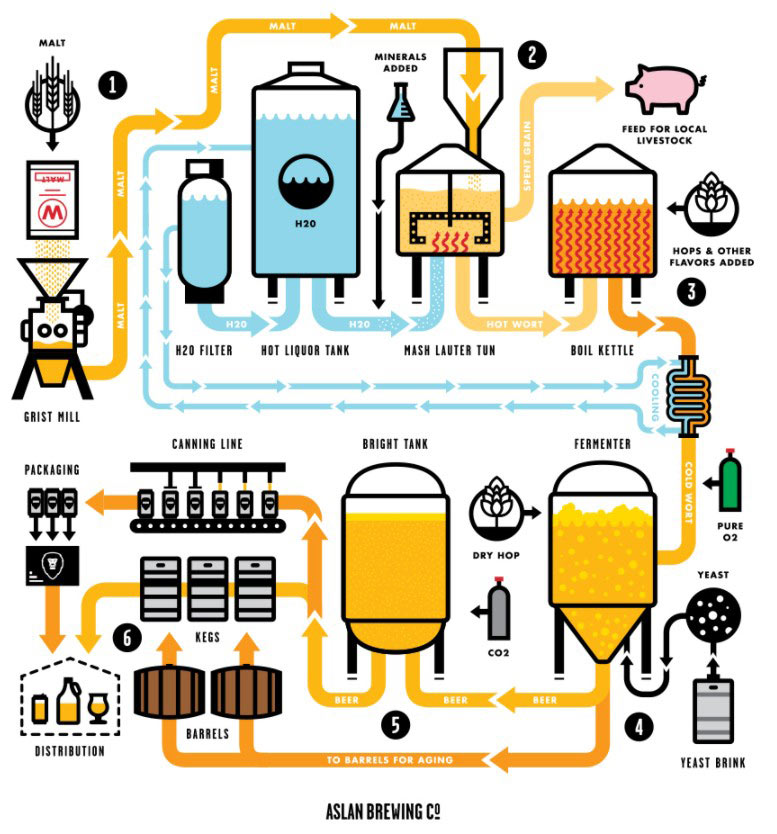 Beer is widely considered the most complex fermented beverage in the world. Its flavor, color, mouthfeel, and strength can vary in more ways than any other craft drink. Beer uses a greater array of ingredients, which creates complexities beyond the reach of distilled spirits, wine, cider, mead and others. The level of precision involved in its creation walks a much tighter line. All of this leads us to the reason why WE LOVE BEER. It is both an expression of artistry and a measure of scientific prowess. To master both is a triumph like none other. With that, let's get a acquainted with the fundamentals of beer production!

The process of brewing all begins (in the brewery) with crushing whole grain malt with a mill. Generally speaking, barley is the most common malt used in a craft brewery. Wheat and rye are two other common malted grains used as well. Milling the malt to be used in a particular recipe is of importance because the process creates the necessary surface area on the malted grain's endosperm. The next process, mashing, will explain why this such a crucial step!

Once milling is complete, mashing begins. This is the process of mixing the crushed malt with very hot water. Think of making oatmeal! Generally speaking the water temperature will range from about 144-158 Fahrenheit. During this stage the designation of "malted" grain as opposed to "unmalted" grain becomes important. Malted grain has gone through a controlled germination stage that breaks the endosperm down and creates enzymes. When subjected to hot water of a very specific temperature, those enzymes become active. When active, they convert the readily available starches in the malt into sugars (maltose) and dextrins (think mouthfeel). This then becomes the body of the beer! The mash will take between 30-120 minutes or more, depending on the temperature and type of enzyme working. Once complete, the liquid is separated from the now spent grain and transferred to the boil kettle. The spent grain is then given to a local farmer to use as livestock feed! (Dont worry, there is no alcohol yet).

Once the boil kettle is full of this sugary liquid, known as wort (pronounced wert), it is brought to a boil. The process of boiling the wort is responsible for two main things. The first is to pasteurize the wort. The second is to add hops, or other flavors such as ginger or molasses. The longer the hops are boiled in the wort will increase the perceived bitterness in the final product. Conversely, if hops are only added at the very end of the boiling process they will be perceived as less bitter and more flavorful. Typically wort is boiled for 60-90 minutes.

After boiling is complete, it is time to move the wort into a fermenter and pitch brewers yeast into it! First, the wort must be cooled. Yeast is a living organism, and it is very picky about the temperature of the environment that it lives in. So as the wort is transferred into a fermenter it is passed through a heat exchanger. This process allows for controlled cooling to a specific temperature (usually 60-70 Fahrenheit for ales). Once the transfer is complete, yeast is pitched into the fermenter. Over the next 4-6 days the yeast will consume all of the sugars that were created in the mash and turn them into alcohol and carbon dioxide. When fermentation is determined to be complete, the now "beer" will be cooled again for conditioning. This time to 30 degrees Fahrenheit. This process supports yeast flocculation, or settling, to the bottom of the fermentation tank. This is done to help clarify the beer, and collect the yeast for re-use in the next beer.

At the end of the conditioning phase the beer will either be filtered or directly transferred into what is called a "Bright Tank". This is where the beer is carbonated and kept for either kegging, bottling, or canning. Barrels are also used for aging! The beer is measured for accurate carbonation and then put into the appropriate package. For Aslan Brewing Company that is kegs and cans.

Now that the beer is ready to be consumed it is sent out into the world! It is either sold to bars and restaurants or grocery and convenience stores. The whole process takes about two weeks for an ale and six weeks or more for a lager.